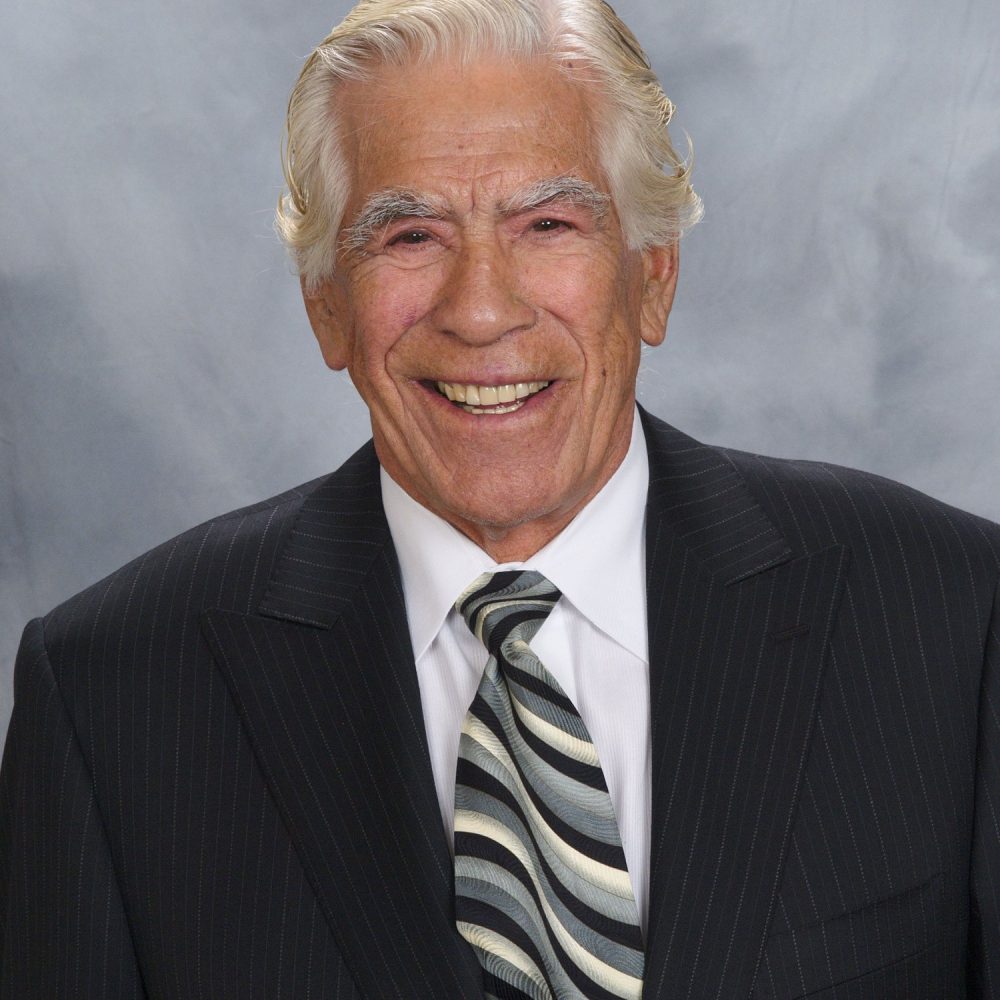 Richard J. (Dick) Ames, born May 4, 1929, passed away on January 30, 2019, leaving an enduring impact that will echo for generations through his family, business, and community. As founder of Ames Construction, Dick was a driving force to a multitude of successful construction projects in the commercial, energy, transportation, mining, rail and water & wastewater industry sectors.

Dick grew up in Farmington, Minnesota, the eldest of eight children born to Chester and Ruby (Reisinger) Ames. He and his siblings worked the family farm, where they learned the value of hard work, honesty, and a commitment to “family first” that would carry through a lifetime.

Dick loved sports and excelled as a competitive athlete, playing football, basketball and track in high school. With an ambition to become a coach, Dick sought a teaching degree—the prerequisite for coaching—and enrolled at Mankato State Teachers College after his high school graduation. However, Dick left school the following year to farm with his grandfather in Farmington. At the age of 22, Dick was married with two sons and his father encouraged him to find stable work outside of the family farm. Starting as a day laborer for a local highway construction company, Dick dedicated himself to the company and quickly advanced to become the owner’s right-hand man.

In 1962, Dick founded Ames Construction, and he considered his thirteen-year-old son Larry—who lent an extra pair of hands after school and on weekends—to be his first employee. Within months, Dick’s brother, Butch, became a partner in the business, and over the next several years, their brothers John, Tom and Ron, along with their nephew Mark Brennan, joined the company. Together they built Ames Construction into one of the premiere heavy civil and industrial general contracting companies in the nation. A proud and dedicated industry advocate, Dick received many industry honors over the years, including the AGC of Minnesota Lifetime Achievement Award in 2006.

Dick married twice and had five children. It was with his second wife, Georgeanne “Lollie” Ames, whom he married in 1968, that he pursued an interest in Arabian horses, founding their Cedar Ridge Farms, in Jordan, MN, in the early 1970s. They have been prolific breeders, principally of Arabian English Pleasure and halter horses, and have shown extensively in most divisions, with Dick excelling at amateur driving. In the late 1970s, he was one of the founders of the Minnesota Medallion Futurity, and later, as he enjoyed competing in reining, he became one of three founders of the Arabian Reining Futurity. A former recipient of the APHA Amateur Showman of the Year, Dick is also a nominee for the 2018 APHA Show Ring Accomplishments. Along with his wife, Lollie, Dick is being recognized as a 2018 leading breeder in the Arabian industry.

In the late 1980s, Dick renewed a relationship with raising and showing championship Percheron draft horses—a tradition deeply rooted in the Ames family history. Today the Ames Percheron Farm is located adjacent to Cedar Ridge Farms. As symbols of strength, a strong work ethic and teamwork, the Ames Percherons have served as official ambassadors of Ames Construction since 1993, appearing at countless community events. The stately 4-, 6-, and 8-horse hitch teams deliver award-winning performances in competitions and exhibitions throughout the United States and Canada.

Perhaps the only thing that overshadowed Dick’s big personality was his big heart. Dick and the company have given monetary support, countless hours of volunteer time, and pro bono construction work to worthwhile causes in the communities in which it works. In addition to “giving back” through the company, Dick’s genuine desire to lend a helping hand led him to invest in local businesses, schools and churches, donating his time and attention to help his community thrive. He brought a world-class draft horse competition to the Scott County Fair in his hometown of Jordan, which rivals some of the best national competitions. He led the revival of the charm and nostalgia of the OK Corral restaurant, which was renamed the Jordan Supper Club. He joined others to bring a locally based business back from the brink of failure, saving countless jobs in the community. Thanks to the loyalty and dedication of its employees who were determined to make it succeed, that company is now a thriving business.

Dick valued loyalty and was dedicated to his faith, family, friends—and football. Perhaps imagining himself as the coach he once aspired to be, he was one of the University of Minnesota‘s biggest cheerleaders and faithful supporters of the Golden Gophers football team. Dick became the first Director’s Award recipient, presented by the University’s Athletics Department to honor a lifetime of support for Gopher Athletics.

Dick was as comfortable in the boardroom as he was on his Green Isle crop farm, where he loved working the land, watching things grow, and maintaining a friendly rivalry with his brother, Butch, to see which of them would bring in the bigger crop each year.

Dick stayed physically active until he was hospitalized in early January for a backache and remained sharp as a tack until the day before he passed away from pneumonia. “I’ve lived a fairytale life,” he observed just a few days before. “I’ve surrounded myself with remarkable people and lived a very full life. In fact, I can’t even believe this isn’t a dream.”

For all of his accomplishments, Dick was known for simply being Dick—larger than life, well-meaning, fearless in saying what he believed, and supporting causes he cared about with a legendary reputation for his generosity. Dick had a quick smile, infectious laugh, and always extended a warm handshake to everyone he met. We celebrate Dick Ames—an unforgettable character who lived every day of his life to the fullest.

Preceded in death by his parents, Chester and Ruby, and his son Bruce, Dick is survived by his wife, Lollie, brothers Butch, Tom, John and Ron, sisters Audrey, Peggy and Mary, sons Larry and Alan, daughters Marilyn and Lara, stepsons Dave and Richard Thomas, and stepdaughter Toni Walsh, 16 grandchildren and 29 great grandchildren.

Interment: Private burial will be at the Farmington Cemetery